Food for the Seoul

This is by no means a comprehensive list of fabulous restaurants in Seoul but rather a list of restaurants that I tried, tested, and loved. There’s still so many things and places that I wanted to eat but ran out of time for. I’ve also included nearby attractions to help you plan out your day in Seoul. 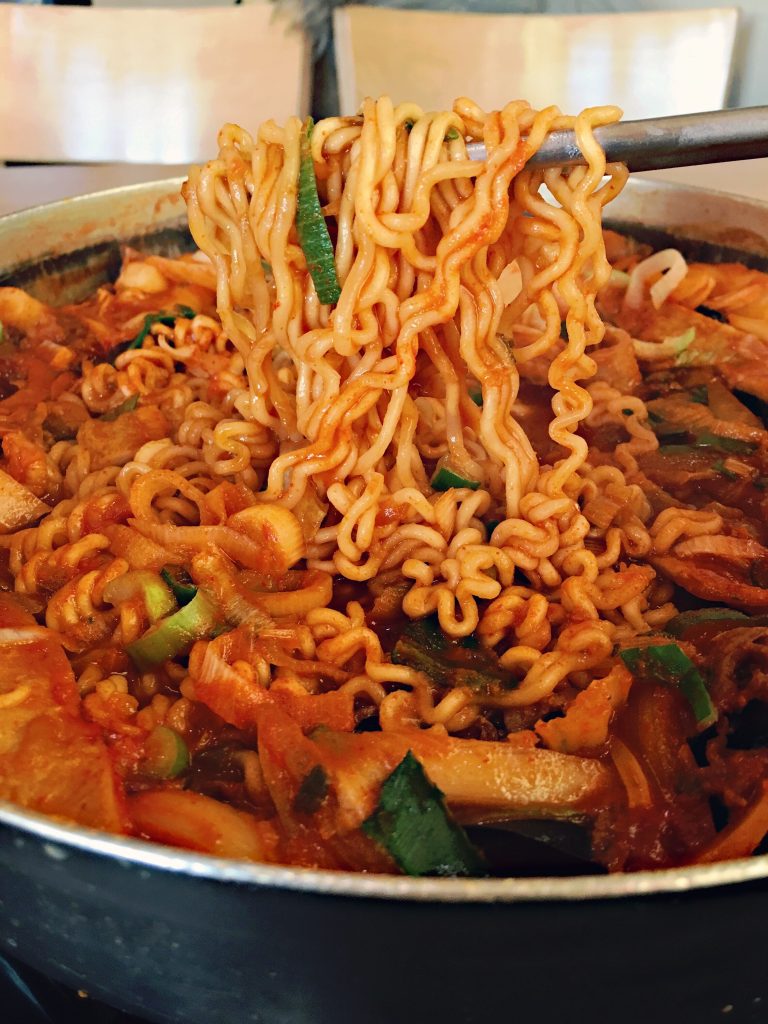 Mukshi Donna Tteokbokki (Insadong, Bukchon Hanok Village)
This was the most memorable meal that I had while I was in Seoul, I regret not being able to go back a second time before having to leave. All the dishes come with rice cakes and you choose the additions that you want to add (I got mine with bulgogi, seafood, and ramen). If you do go alone, they require that you order for two.
Address:74-7 Yulgok-ro 3-gil, Samcheong-dong, Jongno-gu, Seoul
Directions: Located near Insadong and Bukchon Hanok Village. Anguk Station, Exit 6. Turn around once you exit and then turn right at the intersection. Walk along the path until you start to see shops, turn right on Yulgok-ro 3-gil. 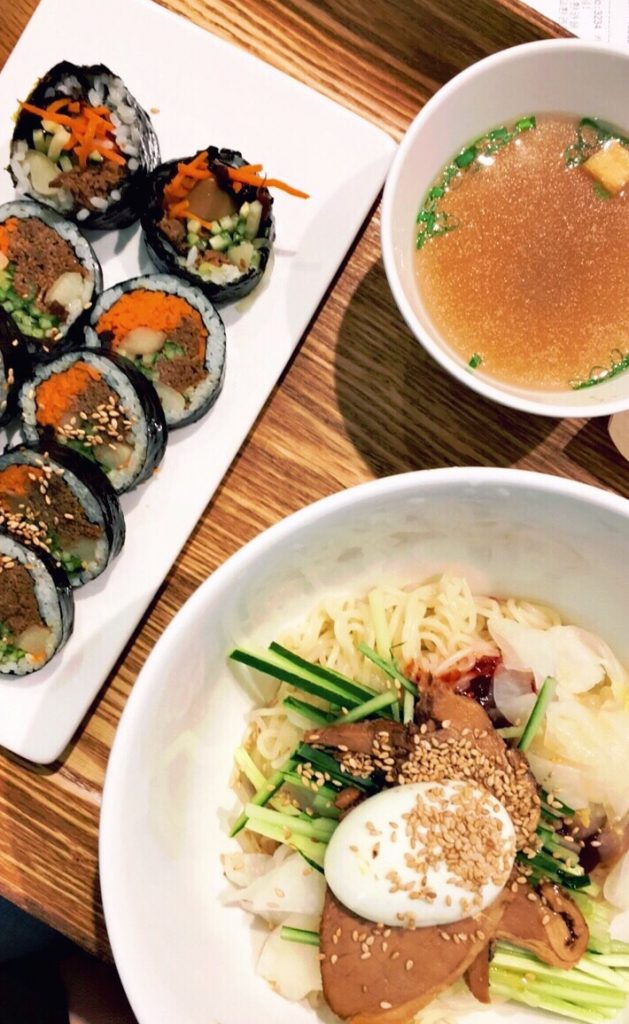 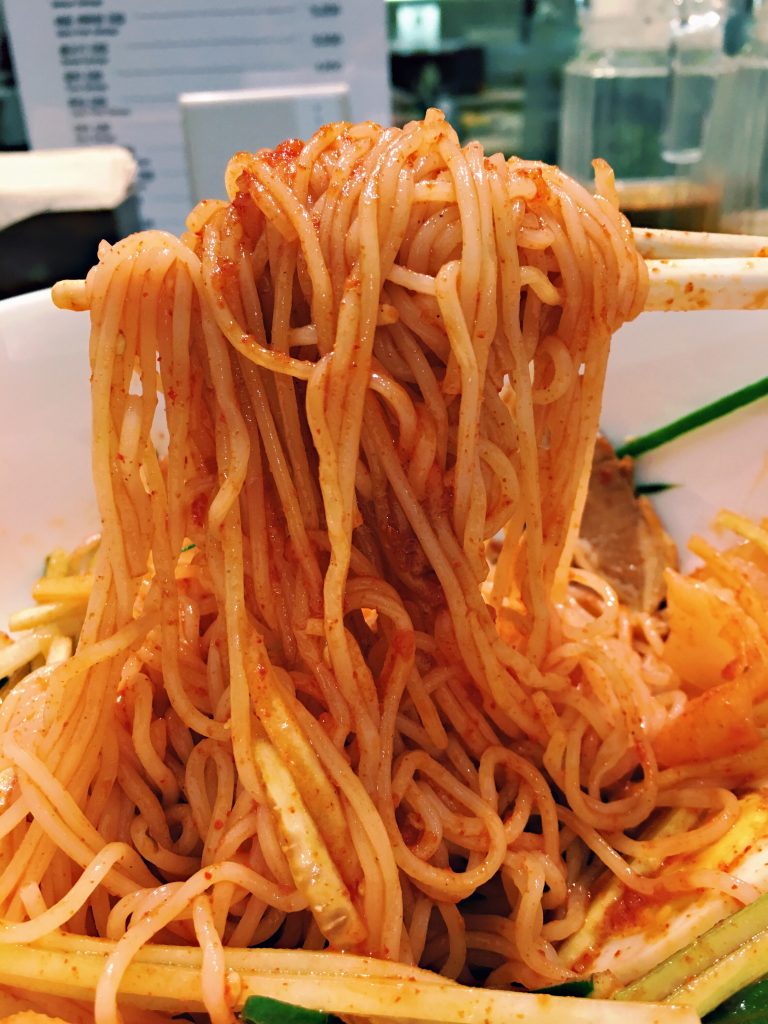 Shinsegae Food Court
If my apartment looked half as nice as the Shinsegae Food Court, I’d be thrilled. Since every food kiosk looks and smells amazing, it can be a nightmare if you’re as indecisive as I am. I ended up going for spicy cold noodles, which I highly recommend, and kimbap.
Directions: Hoehyeon Station, Exit 7 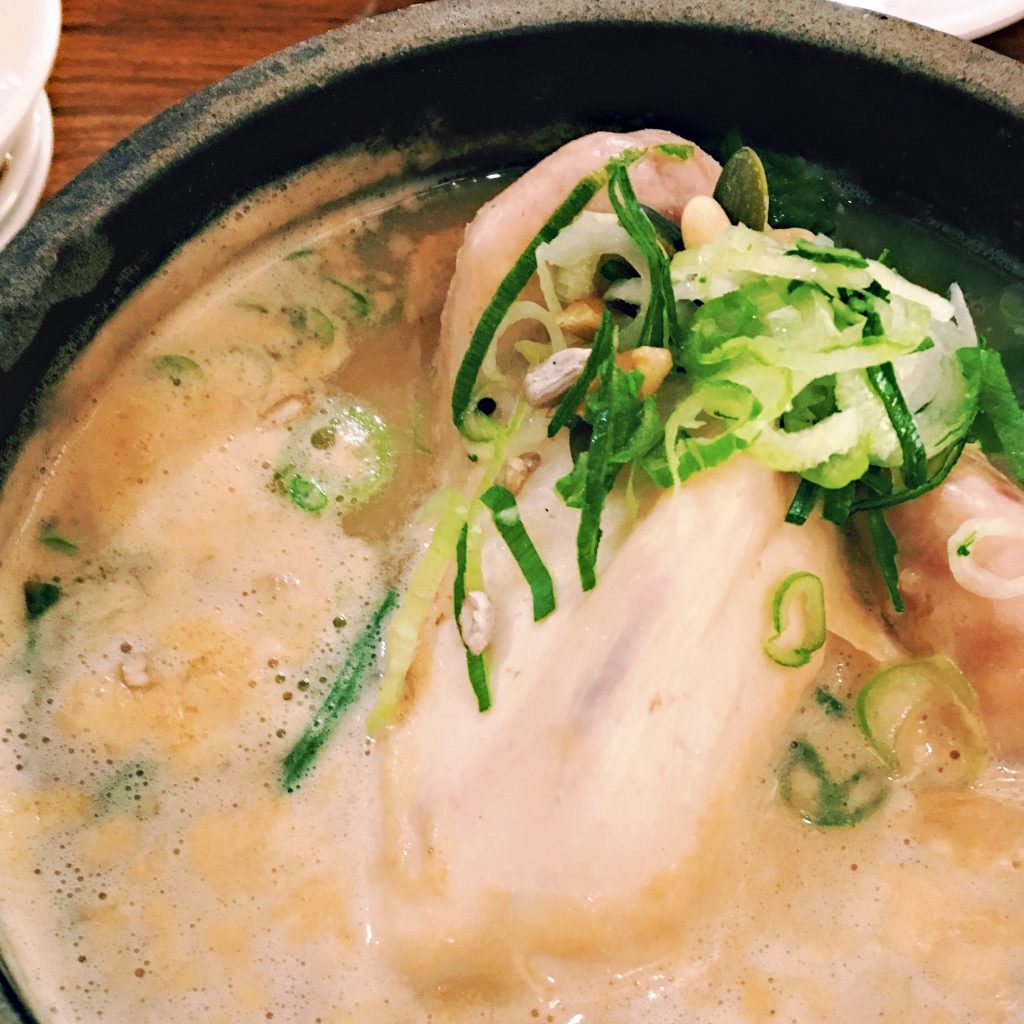 Tosokchon Samgyetang (Gyeongbokgung Palace)
Tosokchon is renowned for its ginseng chicken soup, especially the black chicken with ginseng. Personally, I wasn’t feeling very adventurous with the black chicken and opted for the normal chicken with ginseng. The chicken is stuffed with a mixture of nuts and rice that absorbs flavors from the ginseng and chicken.
Address: 5 Jahamun-ro 5-gil, Sajik-dong, Jongno-gu, Seoul, South Korea
Directions: Gyeongbokgung Station, Exit 2. Walk straight and turn left on Jahamun-ro 5-gil. Tosokchon will be on your left. 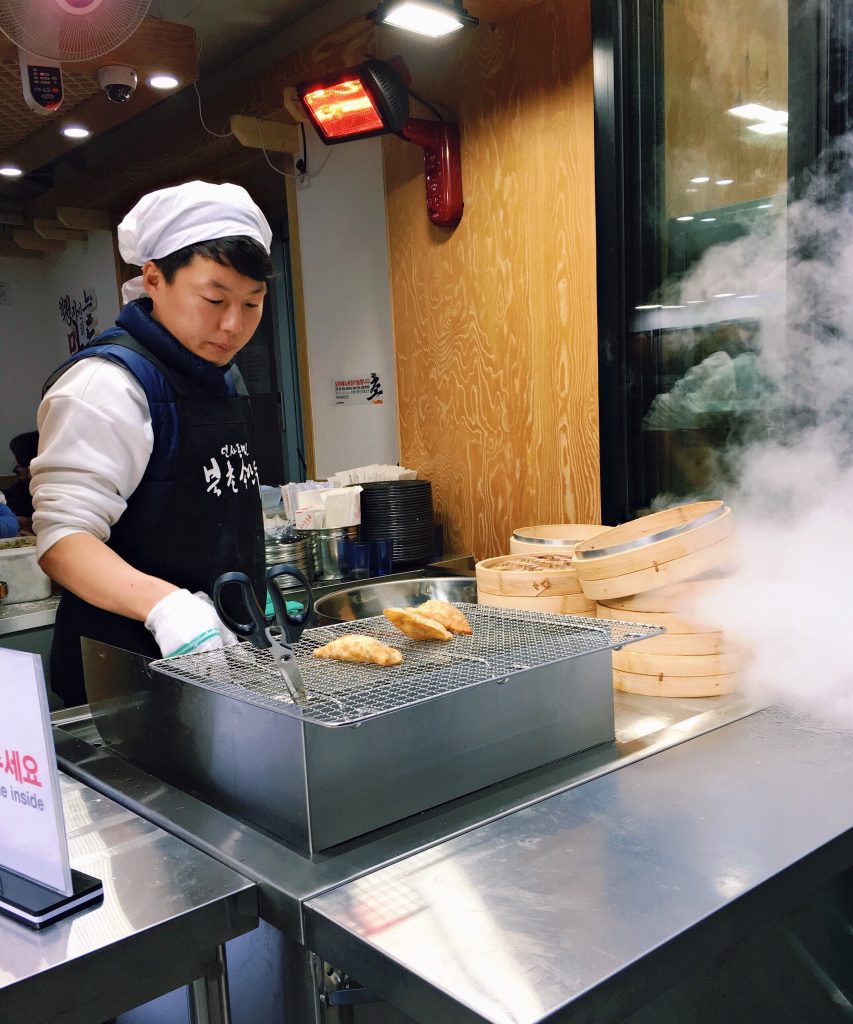 Mandu (dumpling) Shop (Insadong)
I’d already eaten a few meals that day and wasn’t hungry at all but I was wandering through Insadong when I heard a noise coming out of the alley on the right. I saw steam coming out of the window of a shop and was immediately drawn to it. I walked towards and noticed that it was a mandu store populated with locals. I ordered the rice cakes and mandu soup – the broth was delicious!
Directions: Anguk Station exit 6, walk down Insadong until you hit Insadong 9-gil, turn left into the side street, and it’ll be on the left 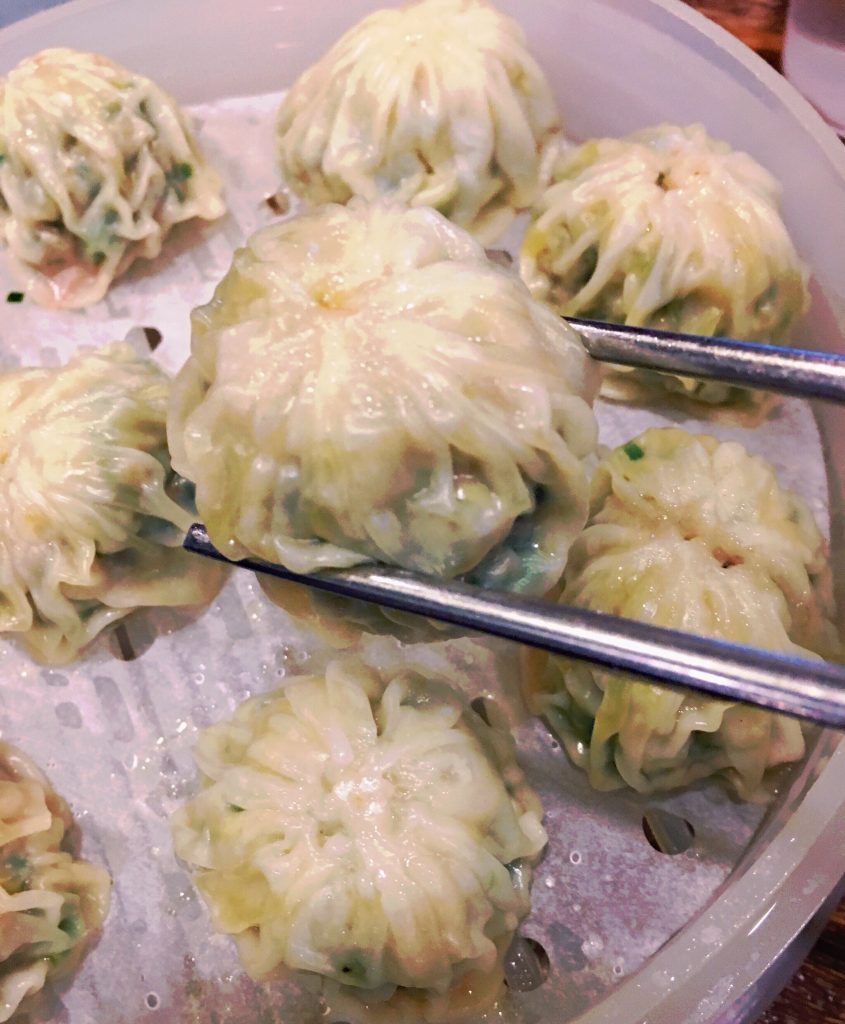 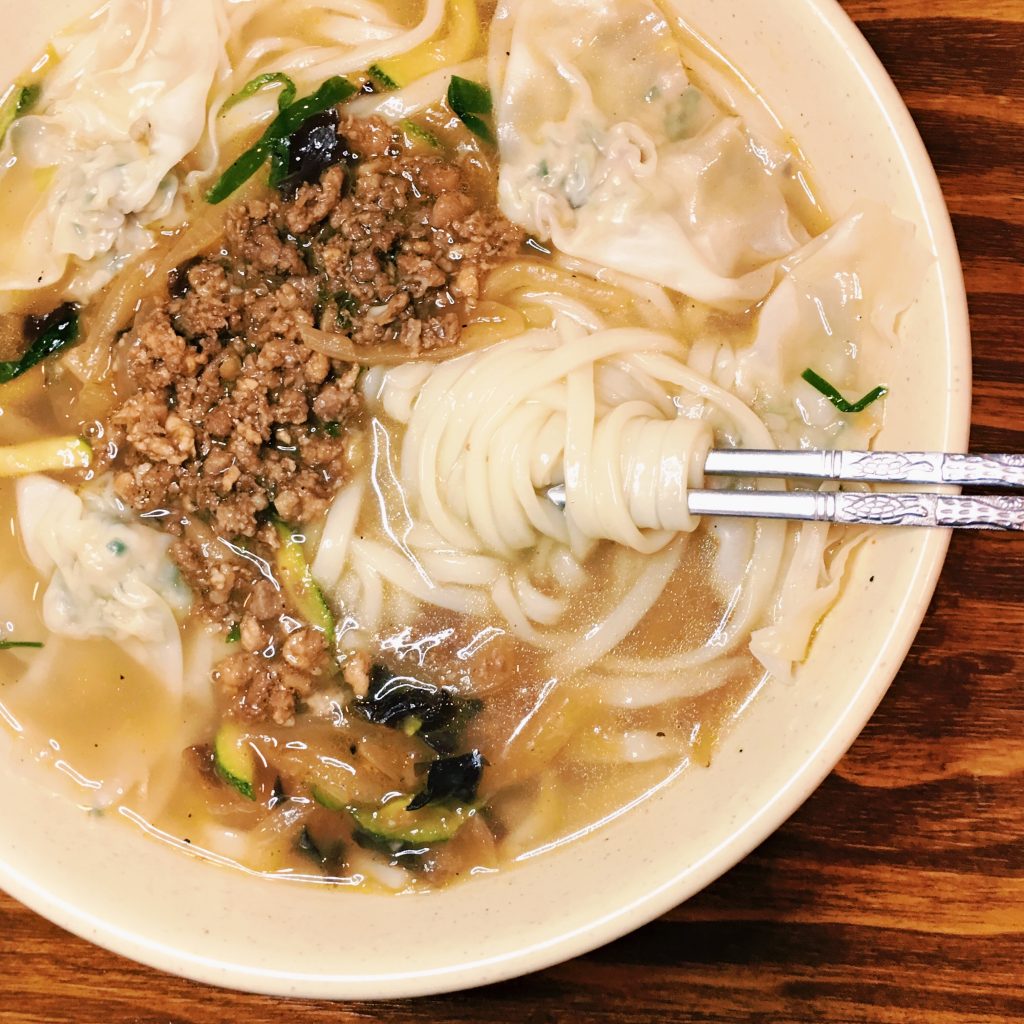 Myeongdong Kyoga (Myeongdong)
Having been around for over 50 years, Myeongdong Kyoga is practically a Seoul institution. Known for their knife-cut noodles, the kalguksu (noodle soup) is their most popular item and comes topped with mandu, minced beef, zucchini, and mushrooms. Their menu contains only four main items but the restaurant is constantly packed and even offers seating for individuals.
Address: 29-1, Myeongdong 10-gil, Jung-gu, Seoul 04537, South Korea
Directions: Myeongdong Station, Exit 8. Turn left onto Myeongdong 10-gil Road. Walk straight and Myeongdong Kyoga will be on your right. 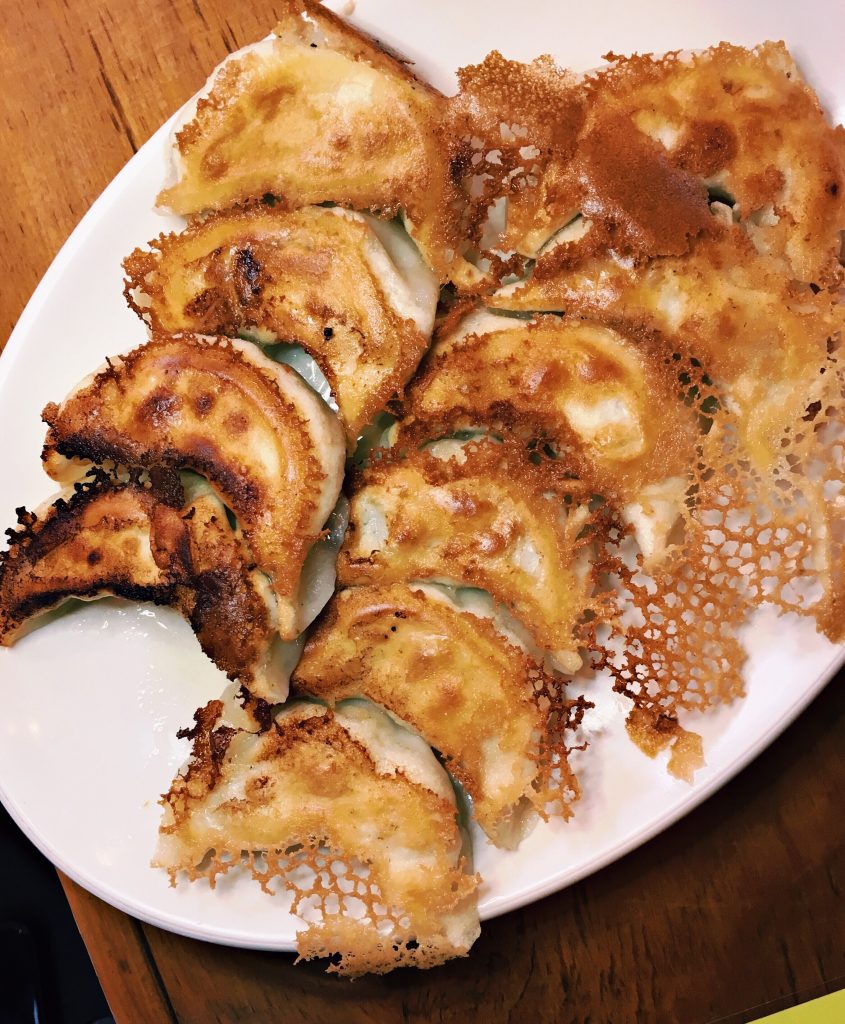 Jonny Dumpling (Itaewon)
Jonny Dumpling is a must. It’s not Korean food but they’re some of the best dumplings I’ve ever eaten. Pan fried to perfection.
Address: 5 Bogwang-ro 59-gil, Itaewon-dong, Yongsan-gu, 서울특별시 South Korea
Directions: Itaewon Station, Exit 2. Make a left after the Hamilton Hotel entrance. Go down the alley and make a right into another alley. Jonny Dumpling will be on your right. 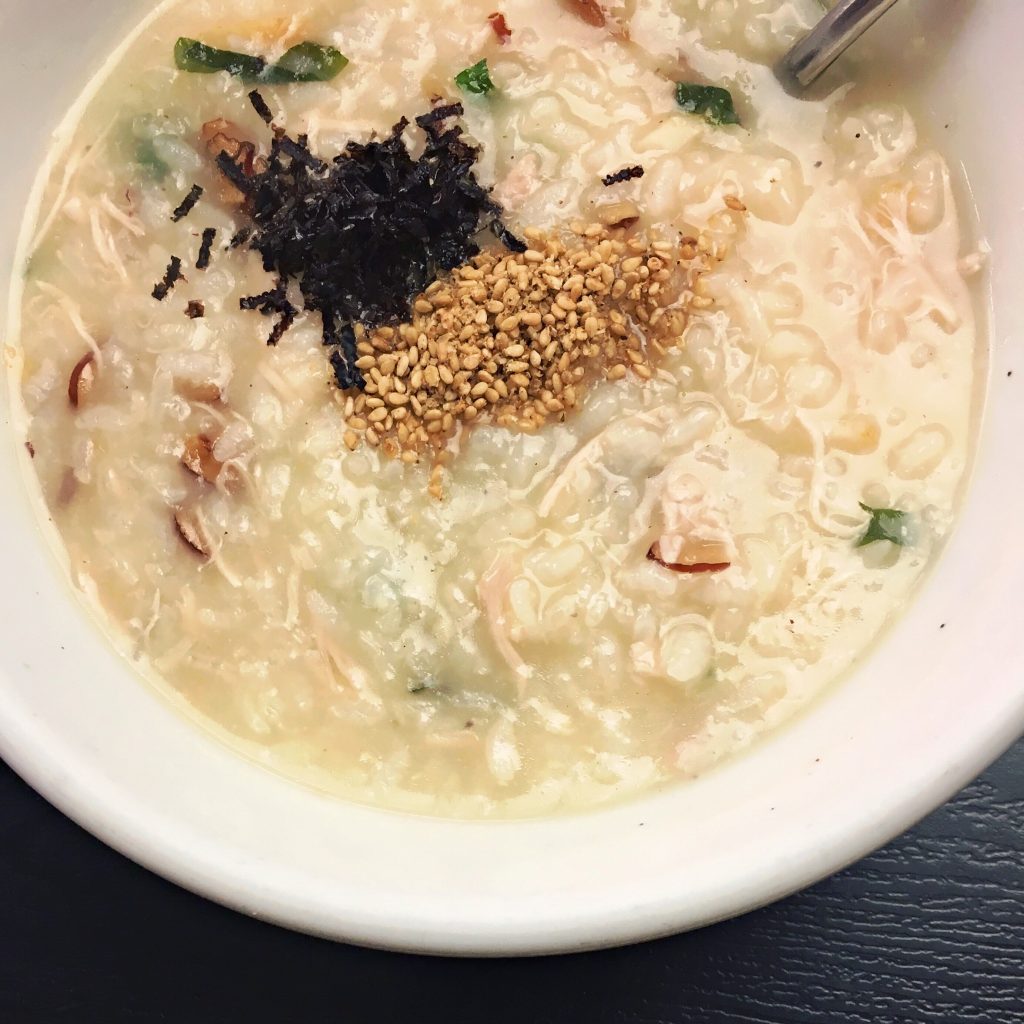 Migabon (Myeongdong)
According to my research, Migabon is well-known for their mushroom and abalone juk, but I was personally craving chicken soup that morning, so I ordered the chicken and ginseng juk. The chicken and ginseng flavors were both very apparent in the juk, and the juk itself had a thick consistency. I love eating juk for breakfast because its filling but also soothes my stomach.
Address: 2-2 Myeongdong 2(i)-ga, Jung-gu, Seoul, South Korea
Directions: Myeongdong station, exit 6. Turn left immediately and then walk down until you see a rose gelato shop. Turn right at the corner and it will be on your righthand side above Sinseon Seollengtong.
Other things to eat:
Getting Weird in Portland
Afternoons at Arrowood

4 thoughts on “Food for the Seoul”